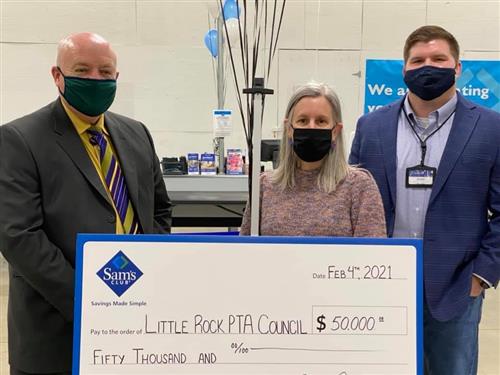 Little Rock-area Sam's Club locations surprised educators in the Little Rock Public School District today with a $50,000 grant to the district's Parent Teacher Organization. The Arkansas-based warehouse club understands the critical role that teachers play and the expanded responsibilities they have undertaken as a result of COVID-19 and wanted to extend their gratitude with the unexpected donation.

PTA Council President Charlene Kirk and LRSD Superintendent Mike Poore joined Sam's Club associates at the Bowman Road location to accept the contribution. "We're incredibly grateful to Sam's Club for recognizing the dedication and contributions of the educators in our District, said Poore. "This sizeable contribution will allow us to provide gratitude meals from local restaurants to every educator at LRSD, while also having dollars left over to support and fund other projects in the future."

"It's always a great day when you can do something good for others, and today we get to honor educators in the Little Rock School District, said Gunny Hoyt, club manager. "Sam's Club has been part of the Little Rock community for more than 33 years, and we are thrilled to recognize an incredibly deserving group of teachers for all of the work they are doing to educate our students."

The Little Rock School District is the state's second largest district, serving approximately 22,000 students. LRSD added the new 400,000 SQF, state-of-the-art Little Rock Southwest Magnet High School to its educational fleet in 2020 with a capacity of 2,200 students. The District has the distinction of having three national Blue Ribbon Schools of Excellence; nearly 200 teachers with National Board Certification; and historically within the past decade, the most National Merit Semifinalists in the state. LRSD is also home to the 2019 Arkansas Teacher of the Year, Central High School's 6A/7A State Basketball Champions (2019-20); and consistently ranks among the top award recipients in STEM-related competitions and the performing/creative arts.

Walmart and Sam's Club contributed more than $53.4 million in cash and in-kind donations last year through the Walmart Foundation to Arkansas-based organizations. The company employs approximately 50,000 associates in the state.